Tencent and Garena’s key gaming partnership is just getting started and will drive a major transformation for both companies in Southeast Asia.

In November of last year, Tencent and Garena (the digital entertainment arm of Singapore-based Sea Ltd.) entered into a strategic partnership whereby Garena gained a 5-year right of first refusal to publish Tencent’s mobile and PC games across Southeast Asia and Taiwan.

While the news was widely reported when first announced, we believe the transformational nature of this deal remains under-appreciated by the general market today. It represents how Garena and Southeast Asia are becoming a critical part of Tencent’s gaming business future. 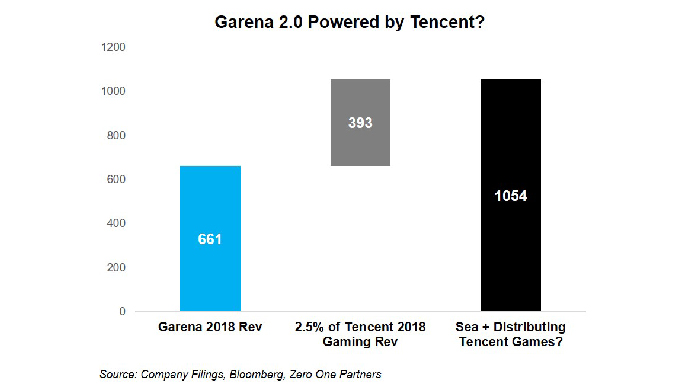 A great deal for Tencent

For Tencent, the Garena partnership is important because of the Chinese gaming regulator’s past suspension of issuing new gaming licenses in the country.

This had slammed the brakes on the company’s growth potential for games. While China’s regulator has recently resumed issuing game monetization license (“banhao”) approvals after a nine-month suspension, Tencent has only received approval for eight games since (7 mobile games and 1 PC game), with an undisclosed number of games still pending approval.

In the company’s recent FY2018 annual results, Tencent said that “Since there is a sizeable backlog for the banhao applications in the industry, our scheduled game releases will initially be slower than in some prior years.” Most recently Tencent was forced to remove one of its most promising games, PUBG Mobile, from the Chinese market entirely due to regulatory challenges.

During the company’s 4Q18 earnings conference, Tencent’s CEO Pony Ma mentioned that one solution they have introduced is a new method to monetize existing Tencent games in China called the “Battle Pass” whereby players can purchase a seasonal pass that gives them access to exclusive in-game content the more they play an existing game.

Although this feature has only launched on Tencent’s mobile game Honour of Kings, it could potentially allow for Tencent to increase revenue without requiring new license approvals since it simply monetizes already approved games, in order to make up for the company’s delay in monetizing new games.

However, it’s not enough. “The Battle Pass is really a new trial. I don’t think it does provide a lot of benefit yet. But, over time, hopefully, the Battle Pass can become another addition to continue the revenue generation,” Pony Ma said.

Also Read: Everything you need to know about #Echelon2019

This is why Tencent’s Garena partnership is becoming increasingly valuable. By leveraging its partnership with Garena, Tencent can launch games in Southeast Asia without needing to wait for license approvals since these games are to be sold outside China.

This not only allows Tencent to monetize its existing portfolio of older games in a new market, Southeast Asia, but also to launch new games first in Southeast Asia while waiting for license approval in China. PUBG, for example, is already available in Southeast Asia and performing very well despite having been pulled in China.

Hence Garena and Southeast Asia can act as a powerful alternate sales channel for Tencent to launch games, reducing the lag between game development and monetization caused by Chinese regulations.

While Garena’s userbase is relatively small by China standards, its still nothing to scoff at. Garena hit 135.7m monthly active users (MAU) in 4Q18, having grown this userbase a whopping 128% in just one year. 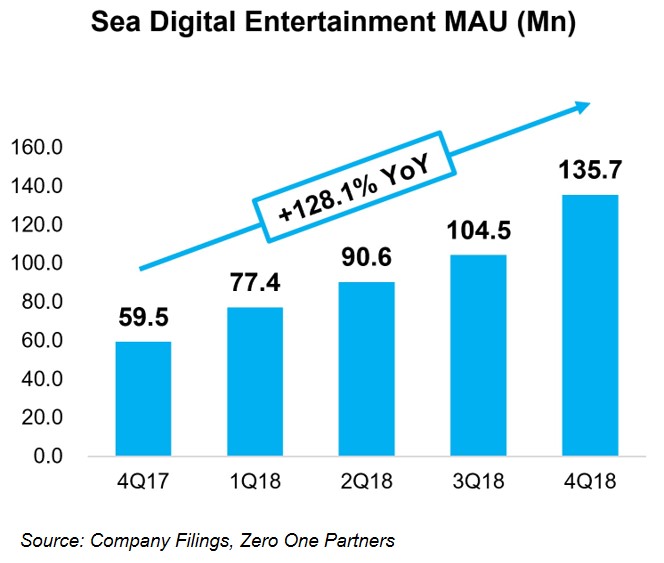 While Tencent doesn’t release user count data for its gaming business, if we simply compare Garena’s userbase to Tencent’s massive 1.1b MAU WeChat user base, it’s already 12% of the total.

Given that Southeast Asia as a region has a total population of 650 million people, there remains a lot of upside for Garena’s userbase. With China already ostensibly saturated by Tencent, Southeast Asia hence represents hundreds of millions of potential new users and is a major growth opportunity for Tencent.

Considering that Tencent is a major investor in Sea Ltd, Garena’s parent, it is fitting that Garena gets first picks for game distribution throughout SE Asia. Tencent has little to lose by sharing its portfolio of existing games with Garena since localization is to be carried out by Garena.

In return, Tencent gets to publish its games through Garena’s established distribution footprint throughout SE Asia and Taiwan with little need to incur incremental costs. 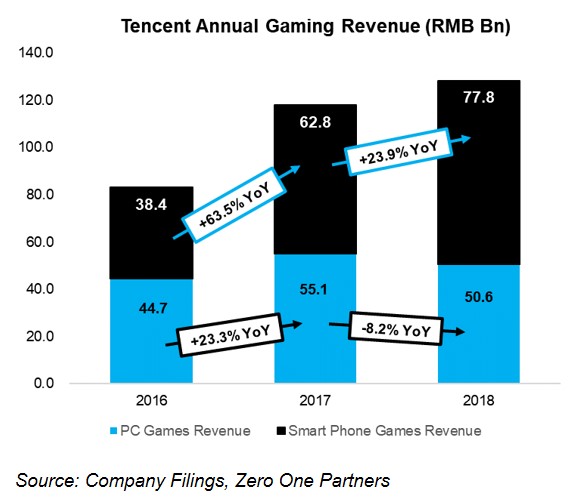 To see how Tencent’s partnership with Garena will become increasingly important, the diagram above shows Tencent’s annual gaming revenue for 2017 and 2018.

Even though total gaming revenue increased 8.9% year-on-year (“YoY”), their PC client game revenue saw a dip of 8.2% YoY to RMB 50.6 bn from RMB 55.1 bn. Tencent could potentially rapidly monetize more PC games through Garena, even though we have yet to see a Tencent PC game being localized.

We can also see in the diagram above how Tencent’s annual gaming revenue growth slowed in recent years due to regulatory issues in China. International sales, such as in Southeast Asia, will become increasingly important as a counterbalance to China’s game monetization delays.

Concurrently, Garena stands to benefit massively from its partnership with Tencent as the company has first rights to Tencent’s existing games portfolio, potentially boosting Garena’s already-strong portfolio of PC and mobile games and further solidifying the company as a Southeast Asia gaming powerhouse.

While Garena already has a successful portfolio of games such as League of Legends, and the self-developed title Free Fire which saw its daily active user count (“DAU”) jump 48.1% QoQ in 4Q18 to 40m DAU, Tencent has the potential to add substantial growth to Garena above and beyond Garena’s own games. 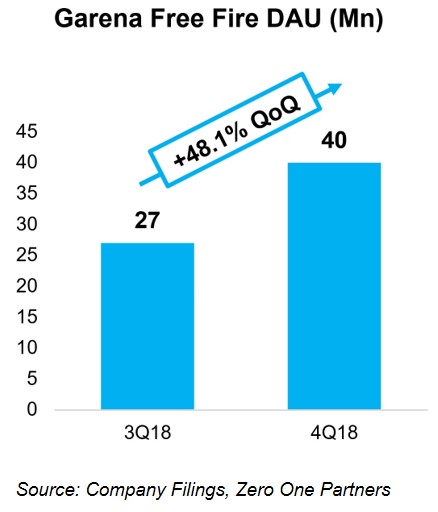 If Garena were to leverage its distribution and Tencent’s existing games portfolio to create just 2.5% growth for Tencent, this would imply US$393m of additional revenue created for Garena, which is already more than half of Garena’s entire annual revenue of US$661m. This simple math shows how Tencent games have the potential to become a massive driver for Garena. 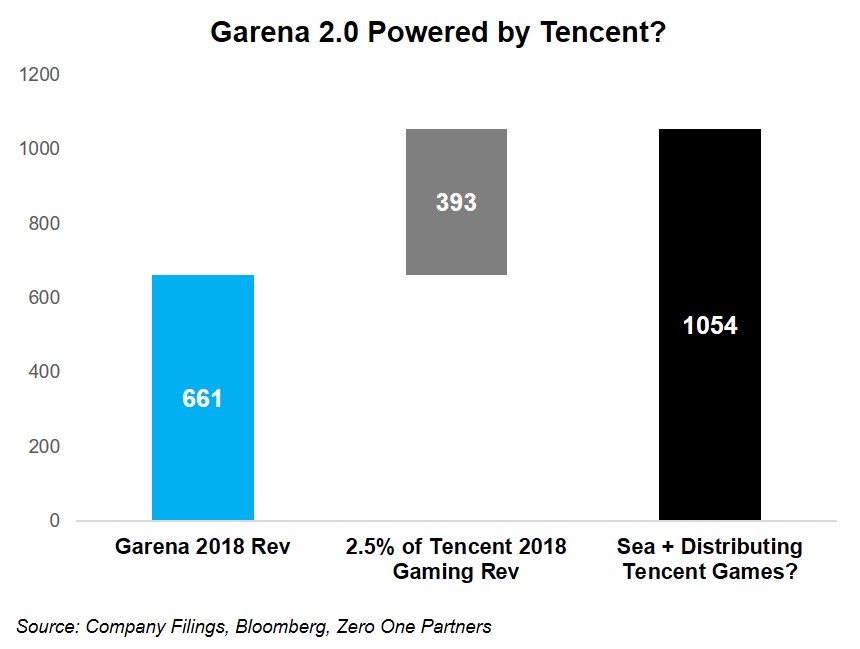 Hence, we believe that with priority access to Tencent’s pipeline of upcoming and existing games, Garena has the potential to significantly increase both spending per user thanks to more available games and to also increase monthly active users as new people are attracted to an expanding selection of games.

The benefits for both companies are just beginning, much more to come

With the January launch of ‘Speed Drifters’ by Garena, a localized version of Tencent’s hit game ‘QQ Speed’, the two companies’ transformational partnership has only just begun.

In the coming years, we are going to witness more and more games rolled out by Garena thanks to its Tencent partnership, and the rise of Garena to new heights as Tencent’s key gaming distribution platform for Southeast Asia.